We had the pleasure today to hold the Free Market Roadshow in Chisinau, Moldova for the third time. During both panels scheduled today, a diverse group of speakers expressed how Moldova should position itself in this ever shifting multi faceted world. In front of a crowd of over 200 students, the day began with an opening speech from Grigore Belostecinic , the rector of the Academy of Economic Studies of Moldova, painting Moldova as a nation needing profound structural change if it is to succeed, with the young people in the room taking the biggest part in this transformation.

The first panel, headlined by lawyer George Teodorescu and entrepreneur Lucia Usurelu, emphasized the necessity of a country like Moldova to lower its trade tariffs and embrace free trade in order to effectively grow economically. However, it was highlighted that, despite the obvious benefits, free trade can have its downsides; both in the medium run with the traumatic effects of the new international division of labor, and in the short run exemplified by bad investment decisions such as the 300$ million dollar lost by Mitsubishi in the purchase and sale of the Rockefeller Center during the Nippon Phobia in the early 1980s, when Japan was portrayed as taking over the United States’ business ventures.

This sentiment today is long forgotten, however was seen back then as an imminent threat to American interests. Following this panel discussion, two well prepared and enthusiastic young students of the ASEM gave a presentation of liberalism in Moldova, arguing that the country must grow closer to Europe rather than to Russia, both economically and socially, as it is still an immature democracy that mis-utilises its resources, emphasizing the profound schism between the homo-sovieticus and homo-economicus, which is at the root of the emergence of the monster that is oligarchic rule. Despite the shortcomings, both were optimistic Moldova would succeed in morphing its civil society, and grow as an integrated member of Europe. 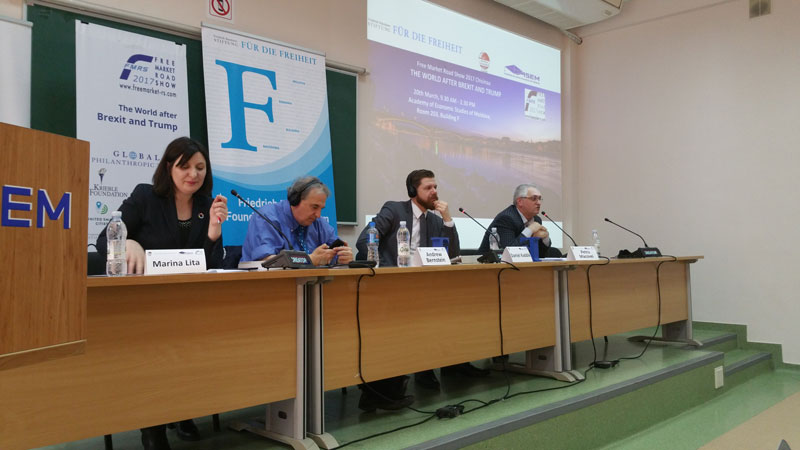 After the coffee break, shortened due to a lengthy yet fascinating Q&A with the students, the second panel revolved around how Moldova should position itself despite the rise of populism in the West and an expansionist Russia in the east, with interventions from professor Andrew Bernstein, Daniel Kaddik from the Friedrich Naumann foundation, and Petru Macovei from the Association of Independent press of Moldova.

Beginning with an introduction to Capitalism and Liberalism, and how these terms came about, the panel focused on the struggles Moldova is facing, both internally and externally. The latter springs from the growing economic uncertainty in the EU following the Brexit vote, as well as the decreasing support from the EU. This decreasing support was said to have followed the recent rapprochement of Moldova with Russia, accentuated by the narrowing of the diversity in the press, now mostly composing of misinformative pro-Russian news outlets.

The panel unanimously agreed that to regain informational plurality, personal involvement was necessary, especially from the students present in the room.