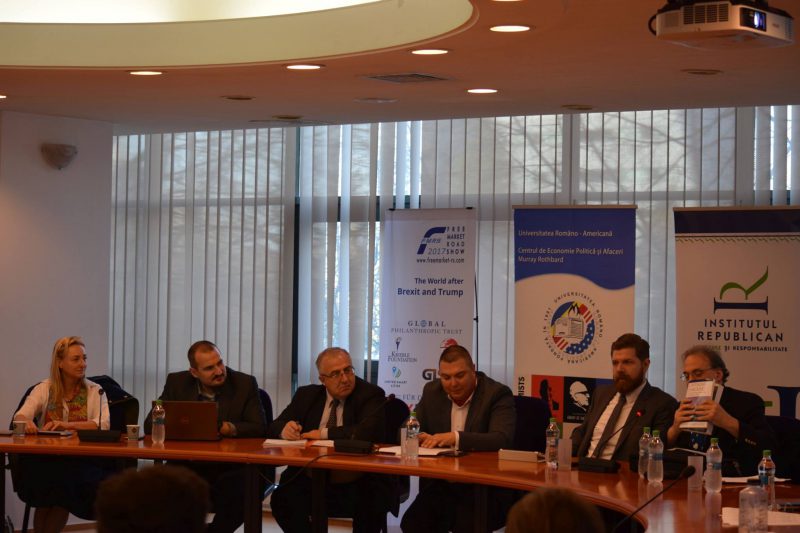 The Free Market Road Show was brought to Romania for the second time this tour, at the Romanian-American University, in partner with the Murray Rothbard Center of Political Economy and Business, the Institutul de Economie Mondiala, and the Institutul Republican. The event saw some of the fiercest debates we have seen so far on the road show, both between the speakers and between the audience and the speakers.

Subsequent to an introduction and welcome from the rector of the university, Ovidiu Folcut, the first panelist, Octavian Bădescu, took the bull by the horns and tackled the issue of the major economic reconfiguration we are observing today. He denounced the aggressive expansion of statism and pseudo-free-trade around the world, from the point of view of an entrepreneur, citing as an example the emerging intervention of the Romanian government on the last frontier: startups. Indeed, the Romanian government has started giving out subsidies to any entrepreneur willing to start a business.

Mr. Bădescu argued that “free money” for new businesses in Romania is contrarian to free-market values, as it artificially eliminates risk, promotes inefficiency, all while hurting the real entrepreneurs who take the risk into their own hands. This discourse was followed by Cristian Păun, who evaluated the feasibility of a liberal project for the UK after Brexit, highlighting the complexity of the matter, and the many variables that come into play. Finally, Octavian Jora tackled the topic of the appeal of Trumpism, focusing on trade and borders. He pointed out that according to the doxa (or popular belief), free trade requires supranationalism, whereas we actually need multiculturalism, and posed the fundamental question of at which level should decisions on borders be made.

After the short coffee break, the fresh set of panelists addressed the troubled times we face today. Most notably, Radu Mușetescu shared his rejection of global pessimism regarding the state of the world, though conceded that a nuclear-like incident has happened in the political sphere, consequence of Brexit and Trump’s victory in particular. However, the highlight of the afternoon panels was the intense back and forths during the Q&A sessions and the coffee breaks. For instance, a brave student of the university confronted the panelists on the limitations of capitalism, insisting that people are happier, more prosperous, better educated, and have better health care in a mixed economy. Naturally, this led to a plethora of comments from the panelists and other members of the audience, both defending and dismantling the young man’s arguments.