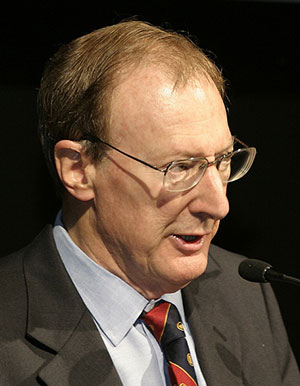 Ron Manners is the Managing Director of the Mannwest Group. He is also Emeritus Chairman of the Australian Mining Hall of Fame Ltd. He is a Fellow of both the Australasian Institute of Mining and Metallurgy, and the Australian Institute of Company Directors, and his contributions to industry and Australia have been marked by several awards including being elected as a “Mining Legend” at the 2005 Excellence in Mining & Exploration Conference in Sydney. In 2010 Ron was appointed to the Board of Overseers for the Atlas Economic Research Foundation, Washington, DC.

END_OF_DOCUMENT_TOKEN_TO_BE_REPLACED
Ron was born in Kalgoorlie, Western Australia, to a family that had a long association with the mining town. A fourth generation prospector, Manners studied electrical engineering at the Kalgoorlie School of Mines before he assumed management of the family mining/engineering business, W.G. Manners & Co. (originally established in 1895) in 1955. He expanded and diversified the company which has evolved to become the Mannwest Group.

Between 1972 and 1995 Ron floated several Australian listed mining companies, one of which became Australia’s third largest gold producer, before joining the board of a Canadian company with operations in Mexico, Brazil and Turkey. In addition to his mining interests, Ron has pursued an interest in economic education, establishing the Mannkal Economic Education Foundation in 1997. He is an life member of the Mont Pelerin Society and is on the coordinating Committee for the Commonwealth Study Conference. Ron is also the author and editor of five books – So I Headed West, Kanowna’s Barrowman – James Balzano, Never a Dull Moment and Heroic Misadventures: Australia; Four Decades – Full Circle, Poems of Passion – A Prospector’s Poetic Soul – as well as numerous papers and addresses.