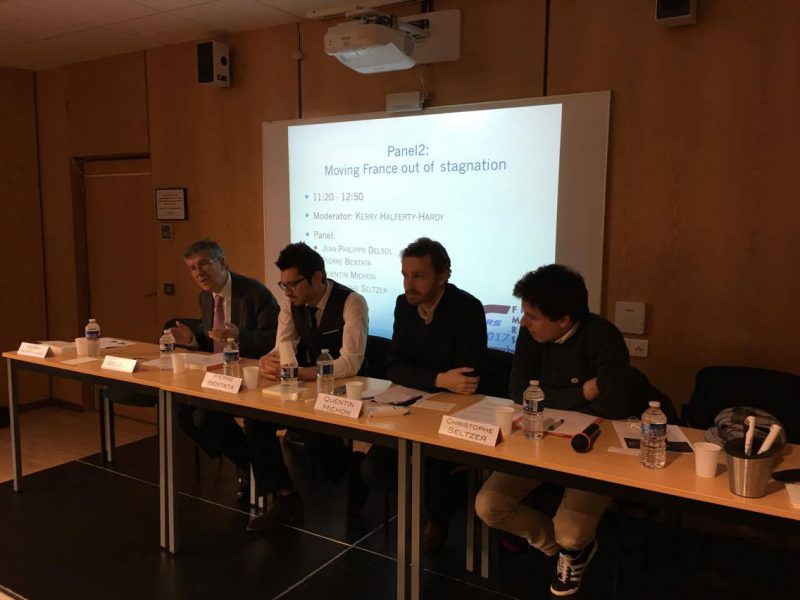 Starting off the second full week the Free Market Road Show, the road show was brought to Paris, the city of lights, to discuss how France, in a climate of major economic and political reconfiguration, can morph in order to emerge from stagnation and regain economic competitiveness. Despite being confronted to a reduced crowd, the level and range of the discussion, whether it was panel presentations or audience questions, was on par with Paris’ historic exceptional standard.

To kickstart the morning, Dwight Lee depicted why an overwhelming majority embraces free-trade when it comes to the actions and decisions they pursue on a daily basis, such as voting with your feet, or choosing between multiple products in a store, whereas many reject it in the public sphere. He described the lack of immediate personal drawbacks when voting against free trade as the root of this phenomenon, which explains the necessity of utilizing resources beyond logic and evidence to win people over in favor of the free market. Following with a talk focused primarily on the pragmatic, Kari Aina Eik communicated the necessity to develop partnerships between the private sector and public entities, sharing her experience forging partnerships while at the United Nations.

She stressed that this dual bottom-up and bottom-down approach has paved the way for successful projects such as UN smart cities, by bringing more individualism into public sector work. Concluding the panel, Anders Ydstedt presented the example of the Swedish shift of the early 1990s that became necessary due to a failing economy resulting from the poor policies of decades prior. Indeed, Sweden enacted many structural reforms, such as the implementation of a funded pension system, and the abolishment of many taxes, e.g. the inheritance tax, that translated into flourishing business and more equality.

Complementing the more global perspective of the first half of the day, the following panel brought a more franco-centric approach. Jean-Philippe Delsol identified one of the primary issues with France to be the omnipresence of the government in the economy. For instance, he highlighted that, despite being above the OECD in terms of spending as percentage of GDP in nearly all government service sectors, France does not lead in terms of results. Fitting his description of a pragmatic minarchist, he proposed alternatives which did not require fundamental change; inject more competition into the public sector by promoting freedom of choice so as to render the system more efficient yet still “fair”. However, as Pierre Bentata explained, there has been a historical rejection of free market ideals in the french public sphere that stems from a chronic discrepancy between perception and fact. He pointed out that the French view government institutions as a transcendental arbitrator of people’s lives bigger than themselves. So, he identified the need to convince the people that their lives are still meaningful in the uncertainty of the free market world. The final part of the discussion focused on the role of media in the diffusion of libertarian values. Quentin Michon, who heads Liberaux.org, shared his optimism with regards to the possibility of changing the mindset of the new generation, although stressed that we must focus on sectors that impact people directly rather than on battles of who is more ideologically pure than others.