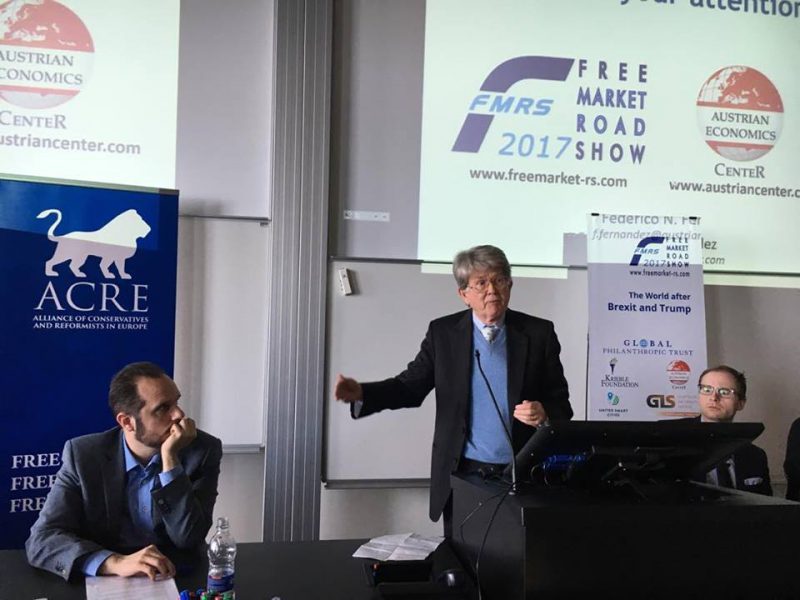 The Free Market Road Show finished its first lap in the capital city of Iceland. Reykjavík was the 17th city visited by the FMRS so far. Our local partner was the Association of Free Students and European Students for Liberty. The Alliance of Conservatives and Reformists of Europe (ACRE) was also present – since they have recently teamed up with the Road Show.

One of the most pleasant surprises so far in this year’s Free Market Road Show was the appearance of Guðlaugur Þór Þórðarson, Iceland’s new Minister for Foreign Affairs. Þórðarson consistently argued in favor of free trade and took a principled stand against the protectionist uprising that we are currently seeing around the world.

In his opinion, Iceland’s rapid economic growth since the euro crisis has been the result of free trade. “We were one of the poorest countries and now that’s changed. At the heart of our success is free trade.” Not only that, he compared this approach to the one followed by Singapore, undoubtedly one of the ultimate beacons of free markets in the world today. “You see, Singapore was very poor. But now it is prosperous thanks to free trade.”

In the meantime, Þórðarson, who has been a member of the Althing, Iceland’s parliament, for the Independence Party since 2003, lamented President Trump’s anti-trade rhetoric. “It is obvious that the Americans have given up on free trade.” However, he clearly differentiated between Trump and Brexit. For him, “Brexit is a totally different thing”, as it is not possible to “change the EU from the inside.”

Bashing the European Union, he remarked that “working for the European parliament is fantastic: you have a great salary, don’t pay taxes, you can hire your wife and friends … and you have a limo service. People don’t believe it!”

Despite the recent backlash to free trade and capitalism, Mr. Þórðarson is still optimistic for the future: “[Free trade] is the only way forward. Everything else has been tried and has failed.”